This post will go into ways we can use Kali Linux to gain access to the target PCs! What is Kali Linux? "Kali Linux is a Debian-based Linux distribution aimed at advanced Penetration Testing and Security Auditing". Kali Linux is free to download and you can find it at: https://www.kali.org/downloads/.

This post is apart of a series of posts, see the other posts at:

Thank you to Chris B for helping me with the notes in this post below!

Any electronic device is a computer all concepts will work wether it is a phone, tv, router, websites, webservers etc Two types of attacks:

Make sure the machine is pingable (open terminal and run ping [IP]). Learning as much as possible about the target is essential for conducting a successful attack, if you can learn things such as:

We can then use this information for identifying potential exploits (search engines are perfect for this). Things to look out for are:

Metasploit is a penetration testing framework that makes hacking simple. It's an essential tool for many attackers and defenders. Point Metasploit at your target, pick an exploit, what payload to drop, and hit Enter. Before testing metasploit on a live system, it's preferential to test on a virtualised system, enter metasploitable. Metasploitable is an intentionally vulnerable target machine for evaluating Metasploit which is virtualised and can be downloaded from: https://information.rapid7.com/download-metasploitable-2017.html.

First from the information you've gathered about the target, we can then search for what exploits are available, and to use metasploit is as easy as:

Typically this will only work if the backdoor is already installed on the target computer.

If this is successful, you will now have access to a remote terminal in the target and essentially do anything you want on the target machine.

A payload is a piece of code that is to be executed through an existing exploit. For example twp types of payloads are to:

On a reverse, setting the open port on the attacking computer to 80, will mimic that of a typical webserver and thus also bypassing any firewall filtration.

Setting a payload in metasploit can be done with the option set payload [payload].

Nexpose is another product from the creators of metasploitable, and it is a vulnerability scanner. Nexpose will find any available exploits in your network that could be used, this could be used from a red team (attacker) and blue team (defender) perspective! 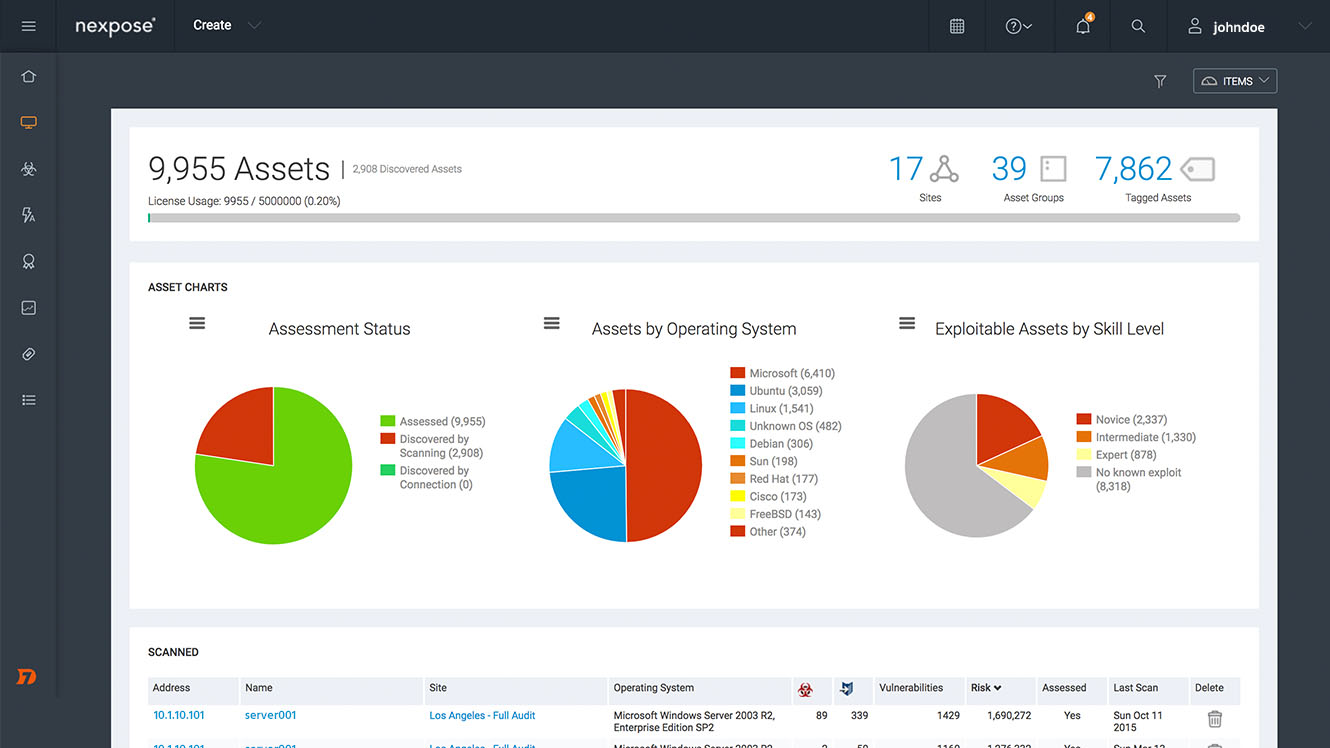 There is a free community edition!

Client side attacks are typically the next step if server side attacks fail or are not viable in the situation. Although, client side attacks can potentially be more difficult to accomplish as we are now (likely) depending on the weakest link in the security to be the human rather than a computer. In client side attacks, social engineering is one of the most used attack vectors, which also means that gaining as much information as possible about the target is critical for a successful attack.

For creating backdoors we use a program called veil. Veil can installed via apt-get, and the source code is all open over at: https://github.com/Veil-Framework/Veil.

To use Veil: (use evasion, and use a rev_https (aka reverse https connection)):

For bypassing more antivirus programs, the more options you change, the less likely an existing identified signature is out there, we can change these options with 1. set PROCESSORS [number(1)] change processors. 2. set SLEEP [number(6)]

Finally use generate to make backdoor.

Connecting from the Backdoor

We need to listen for the connection. Need the attack payload and the port (eg, go/meterpeter/rev_https, 8080)

Now we wait for the target user to run the backdoor (the .exe file).

By mimicking an update server for a software package, we can hide out backdoor as a new update for a software. To do this we use Evilgrade (which is also fully open source): https://github.com/infobyte/evilgrade. Once evilgrade is installed, you can check hijackable programs using show modules, configure options for said modules using configure [module_name] and start evilgrade with start.

This then makes use of MITM attacks such as ARP or DNS spoofing, read more about these in my previous post at [INSERT KALI NETWORK HACKING POST].

When using evilgrade, ensuring that the exploit is listening before mimicking the update server with the malicious software.

Another way to deploy backdoors, is to intercept an .exe that is being downloaded on the target and replace it with the malicious .exe. It's necessary to be the MITM to undertake this attack.

One way to do this (although unsupported as of 08/2017) is via BDFProxy: https://github.com/secretsquirrel/BDFProxy.

Once up and running, whenever a user attempts to download an .exe, it'll be intercepted and injected with the malicious backdoor. Note that the target .exe will be downloaded and run as normal, not raising any suspicions from the user.

The definition of social engineering (in information security context) is: "the use of deception to manipulate individuals into divulging confidential or personal information that may be used for fraudulent purposes.". The aim of the game is to gather as much information as possible about our target such that we can better pose an attack.

Maltego is a piece of software that we can easily & quickly gather information about a target, it can be downloaded from: https://www.maltego.com/. It can be used to determine where a specific target has accounts, websites, phone numbers, etc and who they may connect with. It shows all this in a graph representation in the client.

This is typically done by compiling a malicious script and then disguising it as the source file. Note that this may not work for more technically advanced targets, as when you change the icon for a .exe file, there will still be a prompt to run this file when opened.

For example, if you are trying to disguise a PDF, normally users aren't asked to run a PDF when opened, so this may raise suspicions with the target, and potentially foiling the attack.

In the above example, we highlighted concerns that our file will prompt to be run and have the extension .exe. We can circumvent this problem by spoofing our executable to look as if it was the original file type (eg, .pdf). One way to do this is by using the right to left unicode character in the filename (U+202E).

So what we will do is if our target file that we want to disguise as is name the-book-of-reflex.pdf. We will name our malicious executable as the-book-of-reflfdp.exe, and insert a right to left unicode character before fdp.exe, which will reverse the end of our file, thus ending up with the-book-of-reflexe.pdf.

Browsers will typically remove the right to left unicode character in file names, so make sure to zip the malicious file to bypass this.

There's lots of free options out there on the web for sending fake emails, but they will likely end up in the spam box of the target's email. Another option is to find a SMTP (Simple Mail Transfer Protocol) server that offers a free program, typically these are used for marketing by companies so less likely to end up in the spam.

Kali also provides a utility called sendemail which we can use once we have a SMTP server to use. Find out more about this utility (with the source code) over at: https://github.com/mogaal/sendemail.

Once we're able to send a fake email, we can now embed our spoofed malicious executable on a file sharing website (eg, Google drive) and include it in the email (see Backdooring Any File Type).

It's advisable to use an existing email that you know your target is familiar with from the information that you've gathered.

From the BeEF website itself: "BeEF is short for The Browser Exploitation Framework. It is a penetration testing tool that focuses on the web browser.". You can also find the source code over at https://github.com/beefproject/beef.

What BeEF let's us do is insert some JavaScript code onto a website to 'hook' the website, allowing us to do lots of different things (eg, fake login pages, etc). Since the hook is just embedded in sites with JavaScript, this will enable attacks on any modern browser and device (eg, phones, tablets, laptops, etc).

Once hooked you get all sorts of information on the target system including browser version, operating system, versions of capabilities (plugins) installed etc.

It is easiest to deploy BeEF and run the commands when you are the MITM in the network. This will also allow us to hook all websites the user visits rather than just the one.

One example command we can use is to mimic a browser plug-in update to get the target to download and run a malicious backdoor.

Using the Above - Outside the Local Network

If you are using any of these attacks external to your local network, there's a few steps to configure to ensure:

The main part of launching a hack is not only to get access to a target PC, but get/find what's on the target and make sure that we can always get into the target. Another prime example on conducting a hack on a target PC, may not be to get to that exact machine, more so to get into the network that machine is connected to and find other resources (this is also known as pivoting).

There's also other methodologies for maintaining access such as:

Use the device you hacked, hack into other devices on the intranet. We can set up an autoroute to use metasploit on the infected target as if it was the source attacking device.